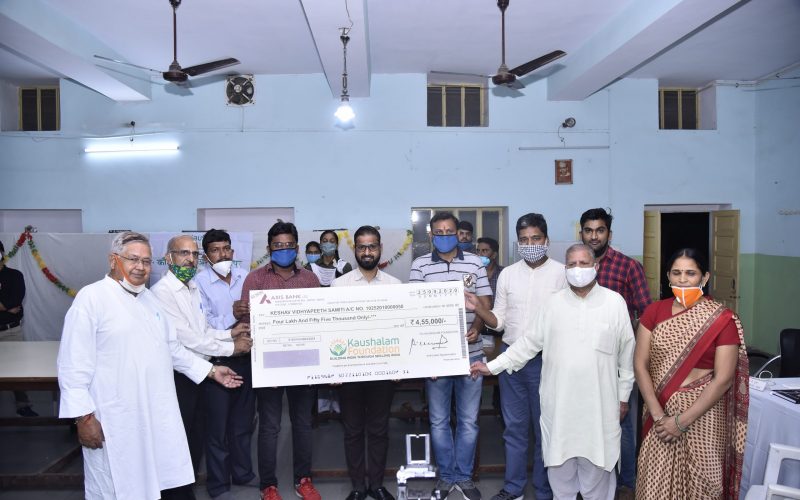 On the international day of Charity September 5th (2020), a distribution ceremony was organized by Kaushalam Foundation (a 100% volunteer not-for-profit organization based in Jaipur). The collected funds were distributed to the young girl students who harbor big dreams of education and self-empowerment. It was a feeling of immense joy to meet the students and interact with the staff.

An added privilege was that my father’s long-time friend Hastimal Jain Ji graced the occasion as guest of honor. Hastimal Ji recounted the many stories of Kaushal Kishor Jain’s life, especially his commitment to community work and charity initiatives.

It’s easy to take a pledge but challenging to adhere to it.

It’s easy to shed tears but challenging to smile.

It’s easy to flow with the tide but difficult to rise against it.

Every community project completed by Kaushal Ji was signified by struggle, hard work, collaborative effort, and ingenuity. The cause of Keshav Vidyapeeth Educational Institution was also started against all odds. Hastimal Ji recounted the struggles that Kaushal Kishor Ji faced to get people’s attention to the project of Keshav Vidyapeeth. But being a master at persuading people, he got potential investors to visit the site and see the ongoing construction work. Once the cause was more ‘visible’, many people became eager to be part of the project as campaigners and donors.

The building of Keshav Vidyapeeth was constructed on what was once an ignored rural area; it’s hard to imagine that so much development could happen amongst that wilderness. But Kaushal Kishore Ji had an unshakeable determination in the idea of setting up a large university there to make education more accessible.

Hastimal Ji spoke about the way charitable work was done in the past. Motivated by the Hinduism tenet of ‘give back more than you achieve,’ most people did not seek recognition for donations. But now, almost every charitable act is motivated by a self-serving interest of publicity.

When the Galta Ji area of Rajasthan and nearby villages were hit by devastating floods in 1981, Kaushal Ji was part of the core group of the RSS that took on rehabilitating the Galta Ji as well as the reconstruction of an entire village. With exemplary efficiency (rarely seen in community projects), the RSS committee managed to construct ‘pucca’ (cemented) houses for a hundred families in a matter of four months.

It’s highly praiseworthy that Kaushal Ji could encourage people from disparate ideologies to come together for a good cause. Hastimal Ji shared how from morning to night Kaushal Ji would be busy calling people on the phone or setting up meetings. Kaushal Ji’s work style was consistent – hold a grand opening ceremony, invite large crowds to see the work that had been done, and on the same day, announce the next community project to get people interested. That’s how he managed to successfully launch several community initiatives. Kaushal Ji was happy achieving his goals without aspiring for personal recognition.

Another hallmark of Kaushal Ji’s style was that he succeeded in making everyone feel accepted by inviting their suggestions and implementing the ones that had broad consensus.

Reminding us that “Hard work always bears fruits”, Hastimal Ji encouraged the students of Keshav Vidyapeeth to focus on expanding their knowledge of academics as well as of the world. He said that their abilities and success will determine the future achievements of the institute.

He ended the speech by reminding us that while ‘Lakshmi’ i.e. wealth is lost by spending it, ‘Saraswathi’ or the education we possess is expanded by its application.